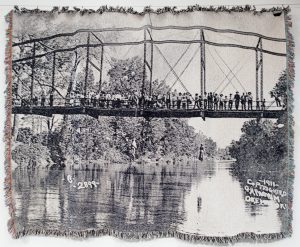 Laura and L.D. Nelson (born 1878 and 1897)[were an African-American mother and son who were lynched on May 25, 1911, near Okemah, the county seat of Okfuskee County, Oklahoma. Laura, her husband Austin, their teenage son L.D., and possibly their child had been taken into custody on May 2, 1911 after Deputy Sheriff George Loney came to their home to investigate the theft of a cow. The son shot Loney, who was hit in the leg and bled to death; Laura was reportedly the first to grab the gun and was charged with murder, along with her son. Her husband pleaded guilty to larceny and was sent to the relative safety of the state prison in McAlester. The son, L.D. Nelson, was held in the county jail in Okemah and the mother, Laura, in a cell in the nearby courthouse to await trial. At around midnight on May 24, a group of between 12 and 40 men kidnapped Laura and L.D. Nelson from their cells. The Crisis, the magazine of the National Association for the Advancement of Colored People, said in July 1911 that Laura was raped before she and L.D. were hanged from a bridge over the North Canadian River. Sightseers gathered on the bridge the following morning, and photographs of the event were sold as postcards. The one of Laura is the only known surviving photograph of a female lynching victim. No one was ever charged with the murders of the Nelsons; the district judge convened a grand jury, but the killers were never identified. The Nelsons were among at least 4,743 people lynched in the United States between 1888 and 1968, 73 percent of them black, 73 percent of them in the South, around 150 of them women.