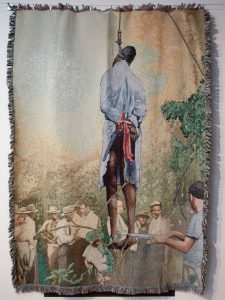 The lynching of W. C. or R. C. Williams, his body hanging from an oak tree, lower body covered with kitchen apron. Blood streaming down legs suggests castration. Onlookers include white men and young children. News Report of W. C. Williams Lynching: Lynch Law – Ruston, LA. The shot riddled body of negro W. C. Williams hangs from the towering oak tree less than 150 yards from where the murder and assault for which he was killed were ommitted. A mob of 300 persons administered lynch law after Williams admitted that he had clubbed mill worker Robert N. Blair to death and criminally assaulted his girl companion. The mob took Williams from the posse which had captured him after a three day hunt, strung him up to the tree, then riddled his body with bullets. Lynching in America is a chapter in our history that seldom gets addressed. Based on one survey, 4,742 African Americans were murdered by lynching between 1882 and 1968. Others were lynched as well, but not nearly in the same numbers. These included people of Caucasian, Chinese, Latino, and Jewish descent. There are similarities between death by lynching and the flood of shootings and killings by other methods in present day America. In sync with the extrajudicial quality of lynching, today’s murders often go unprosecuted, or, if they go to trial, often end in acquittal of the accused. The psychological impact of lynching remains with us today. People of color fear vigilante justice. These crimes frequently go unpunished, whether committed by citizens or by the police.